What do you do with all that cow poop?

Many times we get asked the question “What do you do with all the poop from the cows?”.

The pictures below are a visual of how we turn what many think of as waste into a nutrient for our crops in our quest to be a sustainable and friendly to the environment dairy farm. 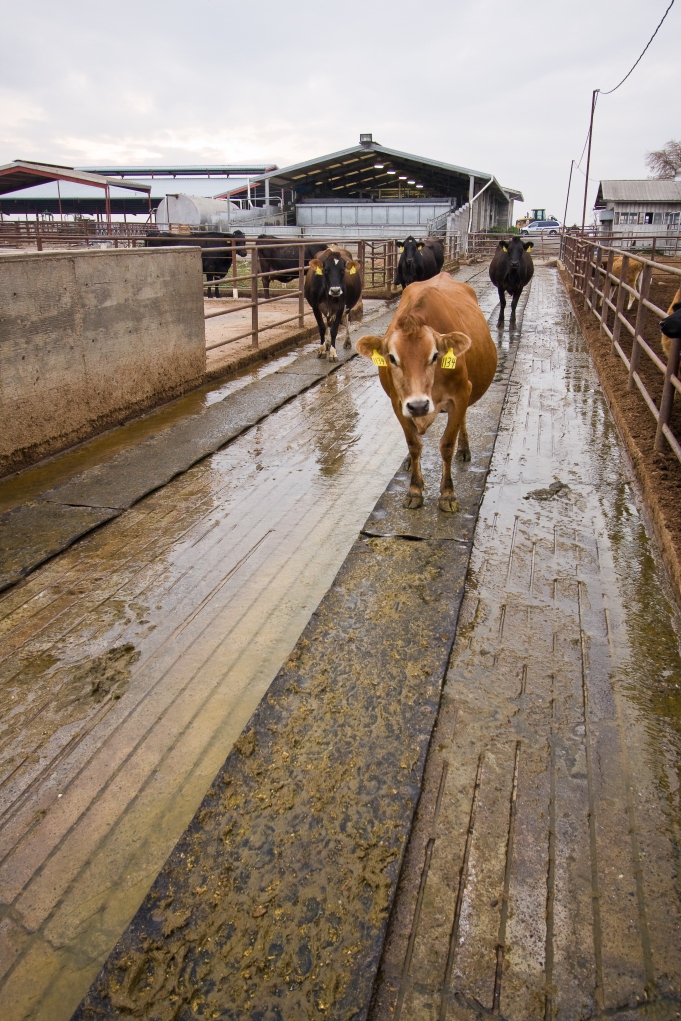 Just as the popular book Everyone Poops says poop happens, it’s just nature and as you can see above cows definitely do poop. So whether you call it poo, poop or manure among other names, follow along to see how we use it in an environmentally friendly way. The manure can either be a problem or a benefit depending on how one looks at it. We see it as a benefit because we can use the nutrients in the poop to fertilize the crops we grow to feed the cows. 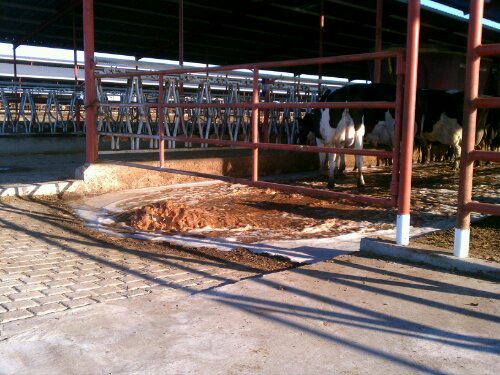 Water flushes the manure into a collection system

The first step in removing the poop is to use water and flush it away from the animals into a collection system. By removing the manure it helps us ensure the health of our animals and manage the waste turning it into a beneficial fertilizer. We recycle water over and over by pumping it from the collection system back to flush the lanes so we don’t waste water.

This sprinkler controller automatically flushes the poop away.

This sprinkler controller, possibly similar to the one in your yard, located in our milking parlor and automatically runs the flushing process, the controller turns the pump on and moves the water between 16 different valves. There is even a remote control we can use so we do not need physically be at the controller if we need to flush a lane independent of the program in the controller.

First stop in the poop collections system is the "Sand Trap", not the same trap you find on the back nine of your local golf course.

First up on the poop’s travel through the collection system is the Sand Trap, no Sand Wedges needed here! The Sand Trap is where the heaviest of the solid material flushed down the system settles out. We clean the Sand Trap every few days, the sand stacked and dried then reused in bedding. The sand is separated early in the collection because it is very abrasive, think sand paper, to the internal parts of the pumps used later in the process.

The second stop for the poop is the settling pond where the solid manure remains. 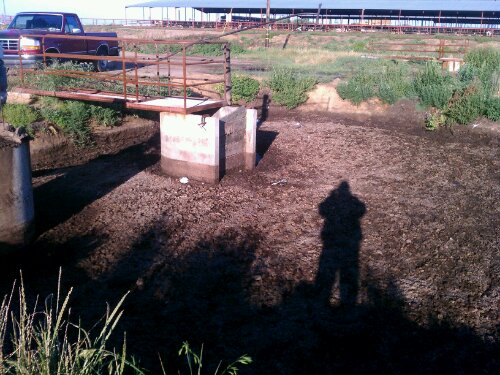 As the manure settles in the settling pond it also acts as a filter so only the liquid flows through this weir.

The second stop is the settling ponds where the solid manure settles out and then the manure becomes a filter so only the liquid moves into the next part of the system. The solid manure is then removed with an excavator stacked and dried for bedding using a process similar to composting to sterilize the bedding. (For more on how we use the bedding here is a post on Making the Cow Beds.)

The dried poop is then moved into these rows similar to compost and sterilized for bedding.

You may wonder what happened to the liquid? The liquid continued on in the system while the solids stopped for a break.

The liquid stays in this pond until used for crops or to flush the manure into the system.

The liquid is held in a big pond until it is either pumped into the flush system to clean the poop from the lanes or applied to the crops.

This flow meter allows us to measure the amount of liquid applied to the crops.

The flow meter measures the liquid applied  so we only use the amount of nutrients necessary to grow the crops. We also sample the  liquid manure and analyze it several times a year for the nutrient content. The data from the samples is then used to mix the liquid manure with fresh water and apply only the nutrients as the crops need them. 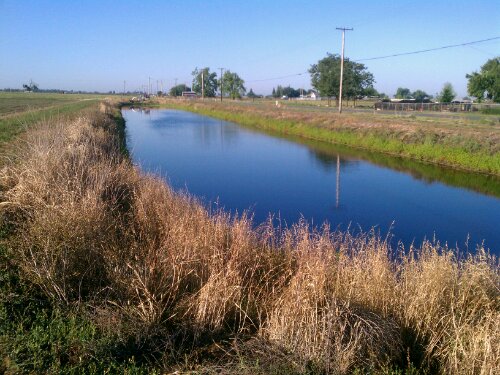 Runoff from the crops is held here and reused many times.

To conserve water and keep the manure from leaving the dairy we use several ponds like this one to collect irrigation water and reuse it.

From cow to crops, crops to cows, cow poop is very integral in our farms sustainability.

Ray is a partner with his parents in Ray-Lin Dairy in Denair, Ca. The operation milks 475 cows and double crops corn & winter forage on 130 of the 240 acres with about 90 acres of pasture. The family also has 1200 ac operation in Klamath Falls OR that raises alfalfa hay, wheat hay, and oat hay. Ray is currently secretary of the Agchat Foundation an entity he helped found whose mission is to empower farmer to use social media. He is currently a on the board of directors of CA Dairy Campaign, Dairy CARES, and is the 2nd Vice-President of Stanislaus County Farm Bureau. He is also a member of the National Dairy Board. In addition to his involvement in agricultural organizations’ he is the Chairperson of the Governance Committee at a newly formed charter school his daughter attends, and serves as a director for the East Stanislaus Resource Conservation District. Ray and his wife Erica live on the dairy with their two children.
View all posts by raylindairy »
« Chocolate Malted Krunch needs your vote!
Family Time »

9 thoughts on “What do you do with all that cow poop?”