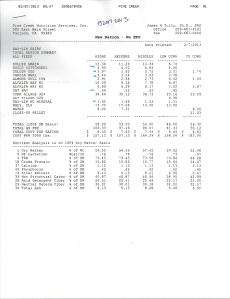 This is a recipe sheet to make Cow Food.

Here is one of the ration recipe sheets we get from our dairy’s nutritionist that we use to feed our cows for their dietary needs. This single shows just five of our seven different rations for the many different groups of cows we have. We group cows based on several factors such as milk production, pregnancy, and age to make sure they receive the most nutritive feed possible and remain healthy. This sheet is similar to those found on dairies everywhere and is not unique to just our dairy and as you can see corn is just one of the many things cows eat.

Ray is a partner with his parents in Ray-Lin Dairy in Denair, Ca. The operation milks 475 cows and double crops corn & winter forage on 130 of the 240 acres with about 90 acres of pasture. The family also has 1200 ac operation in Klamath Falls OR that raises alfalfa hay, wheat hay, and oat hay. Ray is currently secretary of the Agchat Foundation an entity he helped found whose mission is to empower farmer to use social media. He is currently a on the board of directors of CA Dairy Campaign, Dairy CARES, and is the 2nd Vice-President of Stanislaus County Farm Bureau. He is also a member of the National Dairy Board. In addition to his involvement in agricultural organizations’ he is the Chairperson of the Governance Committee at a newly formed charter school his daughter attends, and serves as a director for the East Stanislaus Resource Conservation District. Ray and his wife Erica live on the dairy with their two children.
View all posts by raylindairy »
« Wordless Wednesday – Dairy Aerial

3 thoughts on “What Cows Eat Exposed”